Hamsa Yoga is formed when Jupiter occupies the Kendra and is in its own sign Sagittarius and Pisces or Cancer that is its sign of exaltation.

As Jupiter is a Satvik planet and its position in the Kendra houses brings righteousness  in nature and purity of the mind. Hamsa yoga is one of the great yogas that fall under the distinction of Panchamahapurusha Yogas. Hamsa yoga is possible in respect of all common and movable signs Aries, Cancer, Libra and Capricorn. Those born in fixed sign that is Taurus, Leo, Scorpio and Aquarius cannot possess Hamsa Yogas as neither Jupiter exaltation sign or own house is in the Kendra.

The strength of Hamsa yoga depends upon the Lagan and the house in which the yoga is being formed.  Hamsa Yoga should be very carefully interpreted as it is supposed to produce a person of great character and immense wisdom. The native will be known for his helpful and generous attitude. In Sanskrit Jupiter is called Guru, therefore the native with strong Hamsa yoga will have the qualities that will be similar to that of a teacher.  He will be able to influence others and be a person of simple living and high thinking. He will set an example for others to follow. It is the Yoga for self realization and sacrifice. It is also the Yoga for light, knowledge and truth. Jupiter Hamsa Yoga gives religious merit and spiritual beneficence. As Jupiter is the planet for learning the native will be interested to gather more knowledge and will be a philosophical type.

On the physical front Jupiter is the planet of good health and Hamsa Yoga will make the native healthy and blesses with vitiality and strong immune system. 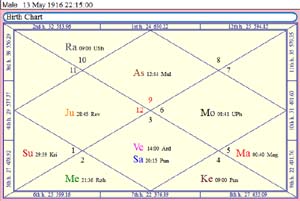 In the above chart Sagittarius is the Lagna and Jupiter is in the sign of  Pisces  in a Kendra forming Hamsa Yoga.  In this particular horoscope we see that despite the Hamsa yoga the native is neither a high personality and has lot of troubles in his life. This is because of aspect of Saturn and Mars on Jupiter. But still Jupiter will give good rise to the native in the period of Jupiter, due to Hamsa Yoga. The native has good personality, temperament, character and liked by others.  The horoscope above indicates the restrictive effects of Hamsa Yoga when malefic aspects and are associate with Jupiter, despite Jupiter being in strong position.