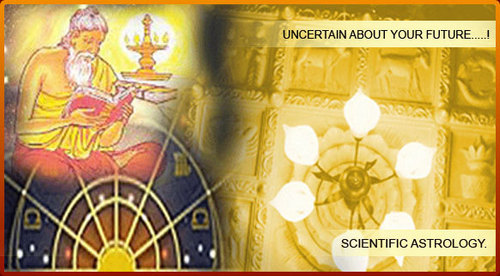 How to technically Evaluate a Horoscope and transits

I am writing this article at the behest of many of my readers who would like to know how I calculate the strengths of planets and houses and evaluate them to produce a Mark sheet of Life. Needless to say, to understand this article one has to have a basic knowledge and should be familiar with the terms and axioms used in Astrology. Familiarity with the Natal Charts and divisional charts and the Dasa system is imperative. To top it all you must have all the canons required for becoming an Astrologer which are detailed below as extracted from Brihat Samhita.

Varahamihira gives the following qualifications of an astrologer in his Brihat Samhita. “The astrologer must be pure, skillful, bold, eloquent, possessed of a ready wit, a knower of time and place, filled with equanimity, not timid in assembly, victorious in debate with other astrologers, expert, free from vices, well-versed in the art of performing rituals of both curative and preventive types, ever engaged in worshipping deities, performing observances and austerities, possessed of scientific knowledge and capable of answering questions and prescribing remedies.”

In his Brihat Samhita, “Canons of the Astrologer”, Varahamihira gives more lengthy rules or qualifications of an astrologer. Students should read these statements by Varahamihira and be aware of these ancient principles in their daily life if they want to be Astrologers. That person, who has mastery of this science of Vedic astrology, who has a good knowledge of Mathematics, who leads a religious life, who is truthful, who is free from conceit and who is well versed in the Vedas, mantras, and tantras, he alone can be called a Daivajna or a seer. In the Hindu Vedic tradition, “religious” refers more to a secular way of respecting the Divine presence in all people and in the environment also. It also refers to one who has a genuine spiritual path and practice. In so doing, one should have an inherent respect for all religions, bearing in mind that though spiritual paths may vary, they all have the same goal. The study of the Vedas and the Upanishads, which underlie all of Vedic astrology, speak of many deities. But all are aspects of the One Supreme Deity, also called the One Underlying Reality.

If a person is unable to understand the real purport of the Science (by separating the essentials from the non essentials by means of his intellectual acumen), or unable to answer any question put to him, or cannot explain the science to pupils, how could he be known as an Astrologer, one well versed in the Science?

If an Astrologer has mastered the astronomical Science, and has brought about perfect agreement between the mathematical results and observations made by means of the shadow of gnomon and the water appliance, and is well established in the science of predictive astrology, his pronouncements will never go wrong or fruitless.

Vishnugupta, also known as Chanakya declared that perchance a man might be able to reach the other shore of the ocean by swimming, being driven by the force of wind. On the other hand, never could one, who is not a Sage, even dream of crossing the great ocean that is known as Kalapurusha or the God of time, i.e. the Science of Astrology.

A true astrologer therefore must lead a life of contentment, detachment and contemplation.

The predictions made by an astrologer who has mastered both the theory and practice of the science of Astrology and Astronomy, as if it were spread before his eyes in this world, inscribed in his intellect and firmly implanted in his heart, will never go wrong.

Once the Birth details are obtained, the astrologer should work out the longitudes of all planets and the Ascendant(Lagan) either manually or using a computer software as shown below.

Now we can prepare the Natal Chart as is given below. I have given the planetary positions only in this chart. If necessary other details also could be incorporated in it which will make the chart very cumbersome. 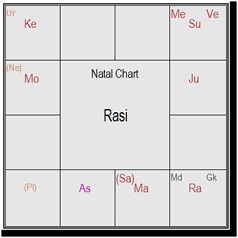 The next thing you should do is using the longitudes of planets in the chart, the strengths of planets should be computed as shown below. You can either use a software or work it out manually which will take approximately 80 man hours to complete.

The method of calculation is well illustrated in the book of “Graha and Bhava Balas” by Dr.B.V.Raman. Or is available on the net if you search for “Shadbalas and Bhavabalas”.

Using these strength of planets we should now calculate the strength of all the 12 houses of the horoscope which is also illustrated in the above book. Let us now have a look at it.

These are the main figures we require to evaluate a horoscope. Using these figures we have to now moderate these for the relevant residential strength of planets and its benefic/malefic aspects for which we can use a Spread Sheet like Microsoft Excel.

The planetary dispositions calculated thus is given below.

From the above you will note the residential strengths of all the planets and their respective nature whether it is a benefic or malefic. Malefic planets if they have a good residential strength will not be that bad in fact, its maleficence will be considerably reduced. You must bear this in mind.

We will have to now moderate the strength of houses calculated above with these planetary dispositions by interpolation techniques. Have a look at the final figures duly moderated.

In this particular example the native has a net strength of 57.70% which is graded as a Second Class horoscope. From the frequency distribution you will note that he has a 71 percentile strength which means that 71% of the population are below him in happiness and success factor. Aaroodha strength is how the native will be viewed by others, further details of which you can get from the internet.

In a similar way we can also find out the transitory influence of planets while in transit using a similar exercise when ever there is a planet which transits a zodiacal sign. We recalculate the strengths of houses after the transit using the same Ascendant of the natal chart. An example of such a chart is given below. This chart shows the influence of Jupiter’s transit in July 2014 to Cancer in respect of my own horoscope. In fact you could do this at any point of time to find the strength of your horoscope as at that point of time as compared to the Natal Chart since there is always a transit of planets since they are all constantly in motion.

From the above you will note that the Jupiter transit to Cancer has benefited me in respect of some houses  like 1st, 4th,7th,10th and 12th houses while in respect of the other houses, I have been a loser. However the net strength is lower by .72% which is negligible.

Now you might have got an idea how well we can evaluate a horoscope using figures rather than groping in the dark and trying to interpret them using axioms which cannot be empirically computed.

Those interested in having your horoscopes computed using the above algorithms can contact me   giving your birth details. Obviously this will be a Paid service.

I am a retired Software architect with more than 55 years of experience in Software development, EDP Management and MIS starting from 1964 and belong to the first batch of computer professionals in India. My hobby is Astrological research. I am 75 years young. I have devised a scientific and mathematical method of evaluating a horoscope similar to the Mark Sheet you receive from Board of Schools or Universities after you complete a degree or diploma course of study using which you will know where you stand among your peers. I do not believe in remedies to propitiate the planets or Gods by shortcut means like wearing a stone, doing Poojas and Homas using a middleman like priest or pundit or anyone who has made it a profession. Nor do I believe in penance or sacrifices done by hurting yourself or someone else. I believe that Prayers to God by the self is the only means of getting His blessings which can ease our problems of mind and body and help us in happy living. Brokers are not entertained by God in this regard. You can contact me on Whatsapp +91 9847823847.
@ramachandran 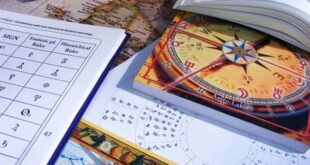 Scientific Research on Astrology: How to Write an Astrology Paper?

Scientific Research on Astrology Astrology is a belief in the divine impact of space objects ...