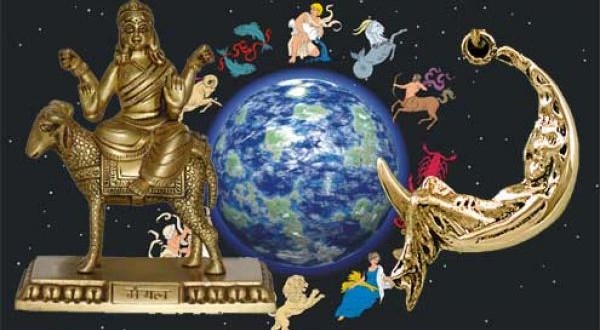 As we know there are different yogas which play important roles in our life. The planetary position at our birth time may or may not create these yogas.The yogas can be formed within relation to Moon or Sun or there can be several other yogas impacting us.In this article I will discuss some of the yogas created with the conjunction of moon and other planets, these are also called as Lunar Yogas.

1) Sunapha Yoga: If there is a planet (except Sun) present in the 2nd house from moon /(Next house from where Moon is placed). It provides self earned property, king like status, intelligence, richness and a good reputation in society. This yoga is called as Sunapha Yoga.

2) Anapha Yoga: If there is a planet (except Sun) present in the 12th house from moon /(previous house from where moon is placed).It gives well formed organs, good appearance, reputation, politeness, dress fondness. This yoga is called as Anapha Yoga.

3) Kemudram Yoga: If there are no planets on either side of moon. This yoga is called as KemudramYoga.

5) Gaj Kesari Yoga: If Jupiter is in Kendra from Moon(1,4,7,10). This gives a person polite and generous behaviour, builders of towns or ruler of a town, lasting reputation even after death.  This yoga is called as GajKesariYoga

The above gives a generic idea several other factors like conjunction with other planets , aspects will play an important role in the judgement of a horoscope.

Astrologer Navneet Khanna, is a former World Bank & SIDA consultant, he has held many prestigious projects in India and Africa before settling down in his native place, near Chandigarh and following his passion in Vedic Astrology. Navneet is very scientific and logical in his Predictions. He reasons his predictions because of which he has a worldwide following and people from many countries solve their problems with his help. He is an expert in Marriage and Love Relationship. In Marriage Matching he does analysis of Guna Milan and also Grah Milan (Matching of the Planets) and will tell you effects and remedies of Nadi Dosha, Bhakoot Dosha & Gana Dosha if present. He is an Expert Astrologer on Many Indian & Foreign Websites like myastrologysigns.com and a frequent writer for many national and international websites and magazines. Navneet believes that Vedic Astrology is a vast subject, it is an ocean of knowledge and wisdom. It is simply up to the individual to jump into the ocean and extract the pearls. With his vast experience on occult subjects he has been associated with leading astrologers in India to promote astrology. Navneet Khanna believes that the energy and inspiration behind him is the Blessings of the Almighty. You may contact him on his number 0091-9417884861 .
@astronavneet
Previous कुण्डली मीलान मे नाड़ी दोष | नाड़ी दोष परिहार उपाय इन हिंदी
Next विवाह में देरी के उपाय