Nadi Dosha Solution in Horoscope Matching – Can It be Ignored

Nadi is the last koot and the most important Koota in Horoscope matching or Kundli milan. Nadi means pulse. The pulse is indicative of heart beat or nervous energy. As per Ayurveda Sastra Nadi indicates the three humours Vaatha Nadi, Pitha Nadi and Sleshma Nadi.

The three Nadis are classified as Aadi Nadi (beginning) Madyma Nadi (Middle) and Anthya Nadi (ending or last part). They are also named as Dhakshina Nadi, Madyama Nadi and Uthara Nadi. The 27 Nakshatras are divided into 3 Nadis.

HOW IS NADI DOSHA FORMED:

If the boy and the girl have same Nadi they form the Nadi dosha. Nadi dosha is never good for marital happiness. The birth stars of girl and boy must not be in the same Nadi. During horoscope matching If the stars of girl and boy are in different Nadis, matching can be done. If they are in the same Nadi, matching should be completely avoided. Especially if there is Nadi Paad Vedha, marriage should be avoided as other wise it will cause separation, insanity or even death.

The only solution is to check for Nadi Paad Vedha. If there is no Nadi Paad Vedha marriage can be considered as it indicates that it is not a complete Nadi dosha.

As Nadis are related to health, happiness, and longevity, importance should be given to the agreement of this Koota. Nadi Dosha not only ruins the happiness and prosperity but even cause mental disorder. As Nadi is very important it has a maximum of 8 score in Horoscope matching.

Nadi Koot is applicable for very couple who intends to have a blissful and happy marriage. Hence Nadi Koota agreement should be obtained before matching.

If you have Nadi Dosha in your Kundli Milan and want to know if it gets cancelled then please look at Horoscope Matching Kundli Milan service from below. This is a detailed Horoscope Matching report which gives you detailed analysis on Guna and Grah Milan. It will discuss your complete horoscope matching in detail and also provide you with astrology remedies and solutions to your problems.

Astrologer Navneet Khanna, is a former World Bank & SIDA consultant, he has held many prestigious projects in India and Africa before settling down in his native place, near Chandigarh and following his passion in Vedic Astrology. Navneet is very scientific and logical in his Predictions. He reasons his predictions because of which he has a worldwide following and people from many countries solve their problems with his help. He is an expert in Marriage and Love Relationship. In Marriage Matching he does analysis of Guna Milan and also Grah Milan (Matching of the Planets) and will tell you effects and remedies of Nadi Dosha, Bhakoot Dosha & Gana Dosha if present. He is an Expert Astrologer on Many Indian & Foreign Websites like myastrologysigns.com and a frequent writer for many national and international websites and magazines. Navneet believes that Vedic Astrology is a vast subject, it is an ocean of knowledge and wisdom. It is simply up to the individual to jump into the ocean and extract the pearls. With his vast experience on occult subjects he has been associated with leading astrologers in India to promote astrology. Navneet Khanna believes that the energy and inspiration behind him is the Blessings of the Almighty. You may contact him on his number 0091-9417884861 .
@astronavneet
Previous Libra and Cancer – Compatibility in Sex, Love and friendship
Next Cancer and Scorpio – Compatibility in Sex, Love and friendship 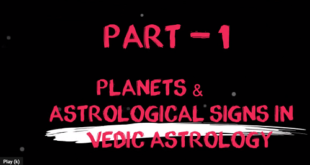 Learning Astrology can be very confusing if you don’t have anyone to guide you. Although ...

How important is Nadi Dosha in matchmaking

It is strongly believed that even if the matching points or the Guna Milan score ...