Scientific Evaluation of a Horoscope

To a layman, a horoscope is nothing but a chart drawn on a piece of paper using 12 boxes either drawn in a square or circular shape as is illustrated below. 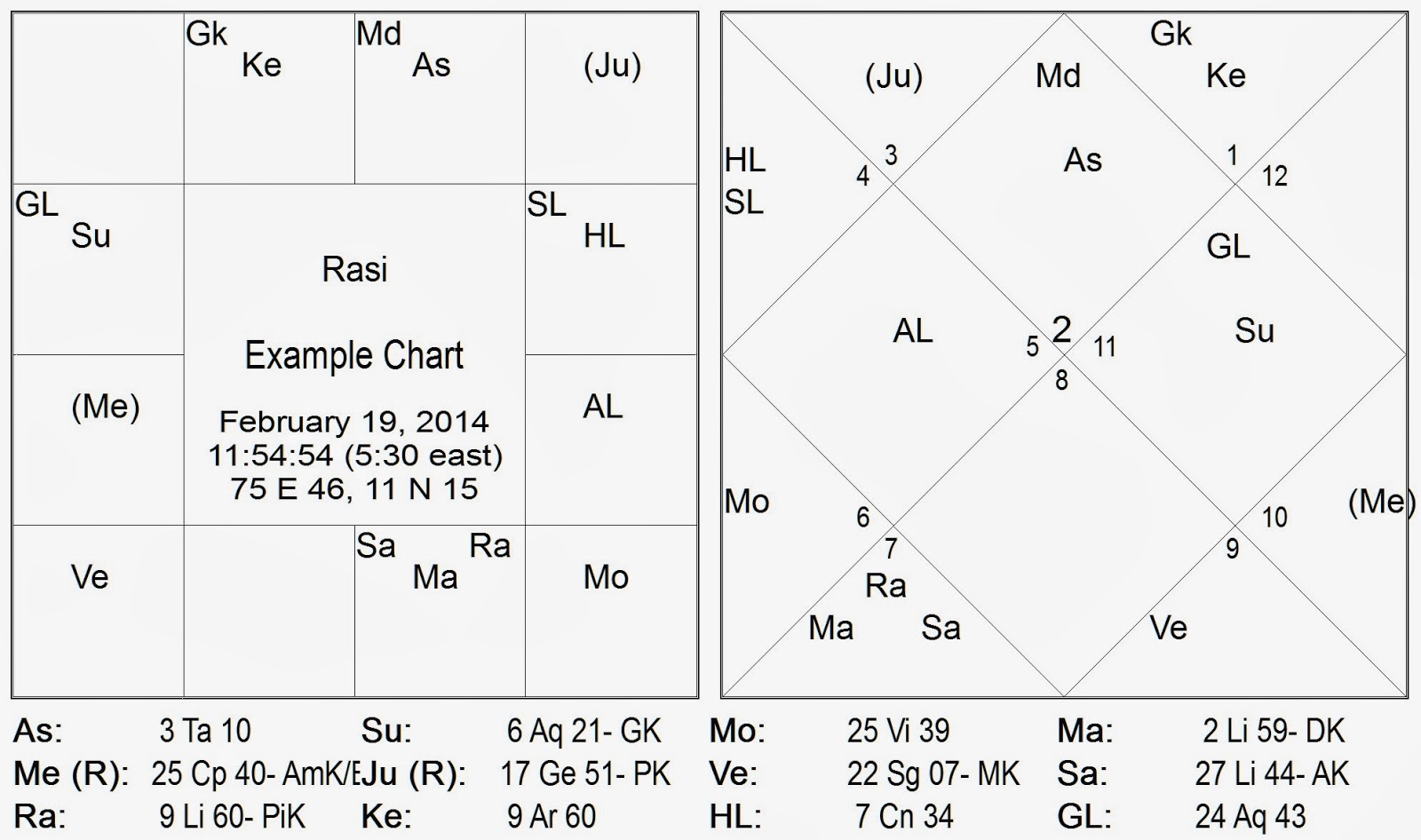 Does it make any sense to you? Obviously not, unless you have some knowledge of Astrology and have seen such charts before.

This is an example of a horoscope chart of a person born on February 19, 2014 at Calicut, Kerala, India at 11:54:54 a.m. You will see the longitude and latitude of the place of birth given in the centre of the chart. On the right is given how it is drawn slightly different from the one on the left. Either way, it does not make any sense to the uninitiated in Astrology.

In this article I am trying to discuss how you can get some meaning out of these charts together with some additional information needed to evaluate them.

There are twelve inner squares along the brim of the outer square. The Central square is used to identify the date, time and place of birth of the native whose chart is being drawn. These squares from the top second are called Aries, Taurus, Gemini, Cancer, Leo, Virgo, Libra, Scorpio, Sagittarius, Capricorn, Aquaris and Pisces.

This chart shows the placement of the 9 planets and the Ascendant. Sun is denoted by Su, Moon is denoted by Mo, Mars by Ma, Mercury by Me, Venus by Ve, Jupiter by Ju, Saturn by Sa, Rahu by Ra and Kethu by Ke. There are few more like AL for Arudha Lagna, HL for Hora Lagna and GL for Ghati Lagna which are used for special purposes. Planets in brackets show that they are in retrograde motion.

The entire Zodiac is 360 degrees which are further sub divided into 12 signs which are each of 30  degrees. So if a planet is placed in a sign, it shows in which 30 degree segment they are in, an approximate address you can call it. The exact place where the planet is in the zodiac is the longitude of that planet.

This approximate position of planets in a sign of 30 degrees is further subdivided into 9 and shown in another chart with accuracies of 3 degree 20 minutes which is called Navamsa in Vedic Astrology. I am not going into details of those extensions of the Birth Chart as we will no more need them for evaluations of the horoscope using software produced results which are more in depth than the manual calculations of evaluations hitherto being followed by traditional astrologers doing the mathematics involved by hand and therefore prone to errors and very time consuming too.

What an Astrological software primarily does to start with is to calculate the longitudes of all planets at the given time, date and place of birth as shown below.

Using the Lagna longitude, a Bhava table is produced as below where you will observe that the Cusp is always the same longitude of degrees in each of the houses of zodiacal signs.

Here you will see where in the bhava chart all planets including Uranus, Neptune and Pluto is positioned.

Look at the Bhava Chart which is the heart of a horoscope and evaluations are done based on this chart alone. 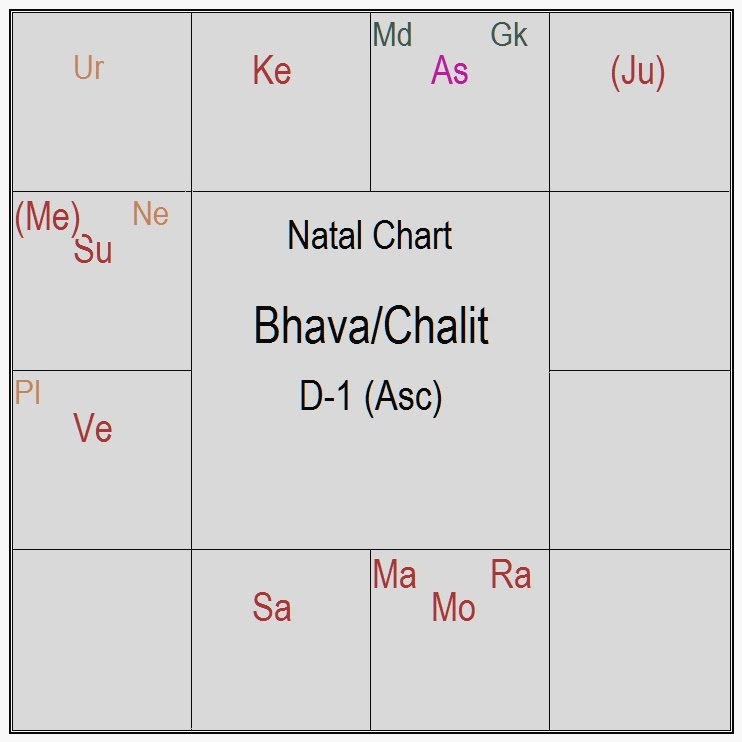 Using this bhava chart, the software can prepare the strength of Houses which are also known as Bhava Balas in Vedic Astrology which includes Shadbalas of Planets and Directional Strengths and Aspectual strength of planets to various houses which is all encompassing of all axioms available in Vedic Astrology. What you need is a little of mathematical knowledge to understand these strengths.  For those weak in Mathematics, this will not be possible to comprehend fully and that is what is the state of most professional astrologers which obviously lead to erroneous evaluations and interpretations of a horoscope.

Have a look at the Shad Balas (six types of strengths) of Planets :

We are only concerned with the Shad Bala shown in the second column of the respective planets. All other columns contain explanatory values from which the Shad Balas are arrived at. You need not necessarily be an expert in calculating these strengths which the software will do it for you and that is how evaluation of horoscopes are made easier.

From these Shadbalas, Bhava balas are derived at,  which is given below. Naturally the software will do it for you taking into consideration all that is needed to be done and there is no need for proficiency in those calculations for you to evaluate a horoscope.

You will now be able to evaluate the strengths of each of the houses which indicate the success factors in matters related to the house, details of which are available in my earlier articles or in the internet if you search for ‘signification of houses in Astrology’. The Grading shows how and where you can place the strengths in such subjective comparisons of the houses. The example cited above is of a very successful person with some of the strengths in excess of 100% which indicates exemplary success in matters related to that house.

See how easy it is to evaluate a horoscope and without the help of an astrologer.

And do read my “Day to day predictions in Astrology” to time your events for successful results. The software will provide you with Dasas and Anthardasa and other subdivisions of the Anthardasas which I have explained in the article referenced.

You can get your Horoscope analysed through Premium Services of this site.

I am a retired Software architect with more than 55 years of experience in Software development, EDP Management and MIS starting from 1964 and belong to the first batch of computer professionals in India. My hobby is Astrological research. I am 75 years young. I have devised a scientific and mathematical method of evaluating a horoscope similar to the Mark Sheet you receive from Board of Schools or Universities after you complete a degree or diploma course of study using which you will know where you stand among your peers. The uniqueness of this method of evaluation is that you can use it in all schools of thought in Astrology including the Sayana System used by Westerners and the strength does not vary at all except for small decimal values. Read my blog www.navagrahastronew.blogspot.com and if interested, come through Paid services and your evaluation report in detail will be sent to you by email. I do not believe in remedies to propitiate the planets or Gods by shortcut means like wearing a stone, doing Poojas and Homas using a middleman like priest or pundit or anyone who has made it a profession. Nor do I believe in penance or sacrifices done by hurting yourself or someone else. I believe that Prayers to God by the self is the only means of getting His blessings which can ease our problems of mind and body and help us in happy living. Brokers are not entertained by God in this regard. You can contact me on Whatsapp 9847823847.
@ramachandran

Yearly Horoscope 2017 for Capricorn – Know Your Year Ahead

From 26 January 2017 Saturn your ruling planet will be in Sagittarius which is your ...

By entering this site you declare you read and agreed to the Site Terms, acknowledged our Privacy Policy and you understand that your use of the site's content is made at your own risk and responsibility. No way AstrologyMag.com will be responsible for the personal information you add to the website.