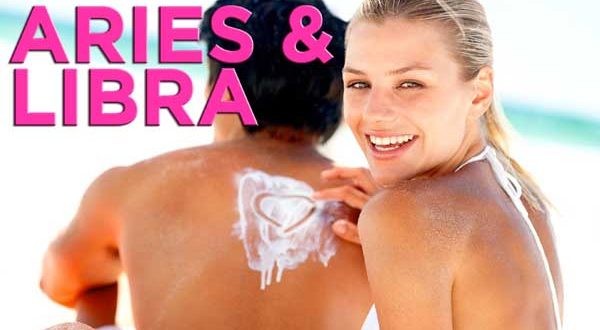 This is one of those matches that are believed to be very adventurous and exciting. These two are opposite sun signs and so you can expect a very strong attraction as they are both drawn to the different qualities in each other that complement their own.

One of the greatest strengths of the relationship between Aries and Libra is that they have a unique ability to compensate for each other’s weaknesses. For example, Aries is very decisive and independent which is a great complement to Libra who is very good at procrastinating and who seems to lack in self-reliance. Aries dare devil attitude is also tamed by Libra’s gentle, measured and conciliatory approach.

You can easily see why these two are madly attracted to each other. Though opposites attract, sometimes the differences can cause the biggest rifts to grow between Aries and Libra. Aries is the true definition of a spirit and is always in hot pursuit of interesting things or things they believe are good for him/ her. Most of the decisions that are made by Aries are self-centered and not necessarily what will be good for both of them as partners.

Libra on the other hand is very caring and thinks though things before making a decision. A Libra will almost always think of the impact a certain decision is going to have on the relationship and is more likely to consult with Aries before making any decision.

Libra will try as much as possible to understand Aries’ hot headedness but if it becomes too much, he/she can also snap and the result will be an epic fight. Remember, Aries is not one to back out of a fight until he/ she is the winner and Libra doesn’t like getting confrontational.

Libra will most likely sulk for a long time and if he/ she compromises, it won’t be wholeheartedly. The only way to resolve such issues is to understand where each of them is coming from and first acknowledge that they love each other and only want the best for each other. If they both can have a trusting and respectful relationship, they will know the time to push for their ideas and the time to compromise and this will lead to a happy and fulfilling relationship.

We have already seen that these two are highly attracted to each other mostly because they are very different. The same applies in bed and you can expect nothing short of unending fireworks. First of all, these two are very attractive individuals and so from the moment they meat, sparks fly between them.

Their sexual relationship is very hot and passionate because they have a genuine liking to each other and when these two are so deep in love, nothing can come in between them especially if they have already reached the point where they know how to make their relationship work.

Aries is very spontaneous and adventurous and you can expect this trait to carry on into the bedroom.

Aries Man in Love | Know About Aries male | What Aries Like

The Aries man knows what he wants and, more often than not, he knows exactly ...