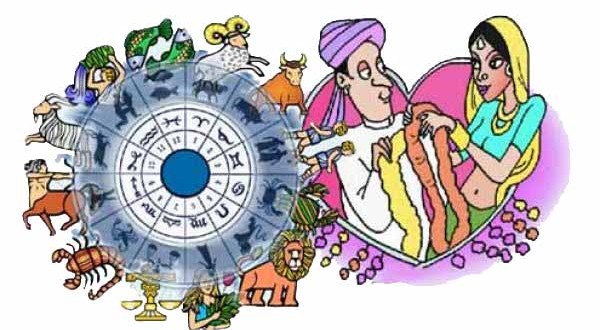 In Hindu marriages, horoscopes are matched prior to finalizing a match, to ensure high compatibility in the marriage. Horoscopes are matched according to Gana Koota, which is an ancient way to ensure long, harmonious and happy unions.The matching of horoscopes by a Vedic astrologer is a time-honored ritual, undertaken by the parents of the bridegroom and the bride, before a match is fixed. The birth horoscopes, which are called the kundlis, are matched, so as to find common factors or qualities in them. Gana koota, which is one of the Ashtkootas, is utilized to assess the positive points or the Gunas in the horoscopes. Guna means a positive or favorable attribute.

In Vedic astrology, 3 types of Ganas are considered. These Ganas determine the qualities or characteristics of a person. These are very important for mental compatibility and temperament. The 3 different Ganas are:

A person’s Gana is mainly determined by the birth Nakshatra, which is the birth star, of the person. A superb match is when the bride and the groom have the same Gana. This indicates high compatibility levels. A marriage between a Dev Gana and Manushya Gana is also considered a suitable match. However, a match between a person of a Dev Gana or Manushya Gana with a person from a Rakshash Gana is avoided. A person of the Raskhasa Gana can have a harmonious marriage with another person of the same Raskhasa Gana.

Apart from the Ganas, there are several other factors in the horoscope that are also taken into account, when matching horoscopes. The overall horoscopes are matched for compatibility, so, though the ganas may not match, the horoscopes may still be considered suitable for marriage, provided the other factors are favorable. The horoscopes are given points based on its features. A high total score means a suitable match. These days astrologer match the Gun and the Grah (planets) Milan to ascertain if the marriage is recommended or not.

When the point scored is Zero or 0 then it is what is called a Gana Dosha. Many alliances can be turned off because of Gana dosha, however some marriages are done despite Gana dosha if other factors are favorable. As told earlier Gun milan is important but Grah Milan (Matching of the Planets) is even more important during horoscope matching, and if planets are promising a good married life then marriage can be solemnized.

1. The are several exceptions under which despite Gana dosha marriage can be done, but only a competent astrologer has an eye to see what the stars tell. As discussed above a Good Grah Milan, that is studying the 7th house, 7th house lord and Jupiter , which is the Karka for husband and Venus the karka for marriage and married life is strong. This is most important to see if marital happiness is there in the horoscopes. You also need to look at the Rashi lords of both horoscope. Similar or friendly Rashi lords are also very important for seeing the overall compatibility.

Gana is a very important Koot because it deals with the temperamental issues. There are times many marriages fail due to severe problems created due to Gana Dosha, the both partner cannot adjust with each others temperament, nature and separate because of the relationship pressures. Problems at home force the native towards extra marital relationship and looking for companionship outside.

Order a Paid Report on Gana Dosha and know the appropriate remedies for free. Know your married compatibility in detail and how you can improve things astrologically. Select “Add to Cart” to Get the Detailed “Horoscope Matching Kundali Milan” Report written by Astrologer Navneet Khanna.

Bhakoot Dosha in Kundli Matching In Horoscope Matching the Horoscope chart of the groom and ...