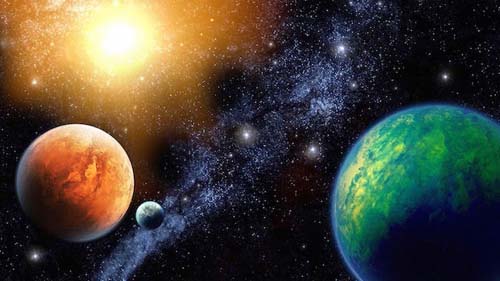 Retrograde Planet in Horoscope as per Astrology

Retrograde planets or vakri grahas as they are termed in Vedic or Indian astrology are those planets of the Solar System other than the two luminaries Sun and the moon which appear to be moving backwards in the natal chart. We know that different planets in the solar system have different orbital periods around the Sun. The three outer planets of Mars, Jupiter and Saturn have a longer orbital period when compared to Earth. As a result, the Earth passes by or overtakes the outer planets periodically which cause the outer planets to appear to move backwards. This phenomenon is known as retrograde motion, which invariably occurs at a time when that planet is visible for a relatively longer period and the earth is between the sun and that outer planet.

How to check retrograde Planet in Horoscope

Retrograde Planets can be easily checked in your natal chart. In the column where there are planetary details if your see ( R ) in front of any planet , it means that that particular planet was retrograde at the time of your birth. Refer the below picture as an example where we see Mars, Jupiter and Saturn are retrograde as they have ( R ) in front of them. 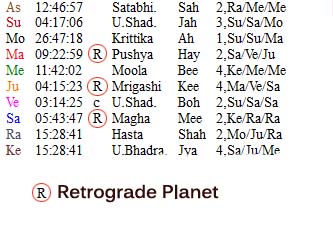 Do Planets Actually Move Back when Retrograde

In reality the planet is not moving backward but there is a difference in relative motion of the planet w.r.t Earth which causes it to appear as being in retrograde motion. Think about 2 cars “CAR A” and “CAR B” travelling at 60 MPH on a highway and suddenly “CAR A” accelerates and starts travelling at 90 MPH. It will appear to people sitting in “CAR A” that “CAR B” is moving backwards although in reality “CAR B” is moving forward albeit at a speed slower than that of “CAR A”.

All planets get retrograde except Sun and Moon. The two inner planets of Mercury and Venus which are closer to the Sun when compared to Earth also retrograde due to their conjunctions with the Sun. A planet when in retrograde motion is closer to the Earth than in normal case.

Astronomically speaking, when a planet goes from perihelion ( the part of a planet’s or bit nearest to the Sun) to aphelion (the part of a planet’s orbit most distant from the Sun) as it recedes from the Sun, it gradually loses the power of the Sun’s gravitation and, consequently, to gain it, it retrogrades. When the planet comes from aphelion to perihelion the gravitational pull of the Sun is powerful and the planet starts to accelerate and appears to move in a direct or clockwise manner for an observer on earth.

Do All Planets get Retrograde

Out of the nine planets in Vedic astrology the Sun and the Moon are always direct in motion and never go retrograde. Think about the fact that the month of June always comes after the month of May and not the other way around. In a similar star or Nakshatra Purva Phalguni always precedes Uttara Phalguni and not the other way around. Kanya rasi / Virgo always follows Simha rasi / Leo and Tula rasi / Libra always follows Kanya rasi /Virgo.

The two mathematical nodes or shadowy planets Rahu and Ketu always move in a retrograde or anticlockwise manner. The remaining five planets which term as tara grahas are generally direct but will periodically turn retrograde like Rahu and Ketu. 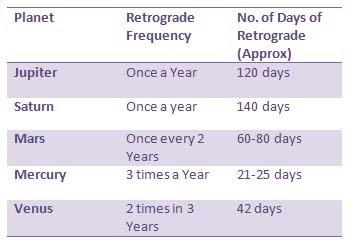 Importance of Retrograde Planets in Astrology

Retrograde planets are very important when we read the horoscopes. Planets in retrograde motion (especially the tara grahas) are given much importance due to their ability to alter astrological observations and predictions. It is said that retrograde planets become very powerful and their ability to do good or bad can be enhanced. A planet in exaltation but in retrograde is as good as a debilitated planet while a planet in debilitation but retrograde is as good as being exalted.

Vakri grahas or Retrograde planets can give most unexpected results. Those who follow Horoscopes deeply know that a planet in retrograde motion in Birth chart indicates past Karma, which cannot be altered even by doing all remedies in this life time.