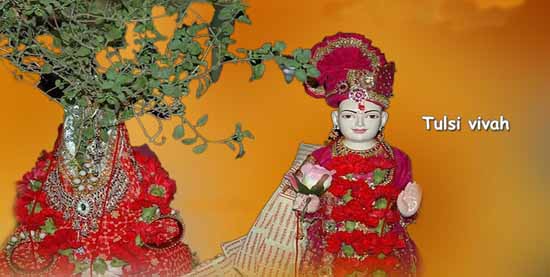 Importance of Tulsi Vivah for Marriage

A Mangal Dosha causes serious concern when it is detected in the birth horoscope of a person. This dosha is considered to be inauspicious, especially so in matters pertaining to marriage. When Mars is placed in the first, fourth, seventh, eighth, or the twelfth house, the person with such a placement in the horoscope is referred to as a Manglik.

Who can be Mangalik

Both men and women can be Manglik. As Mangalik dosha is formed due to the placement of Mars, it does not have any relevance of gender. Therefore men or women who have above placement of Mars can be mangalik. Mangal dosha or Mangalik dosha is a serious inperfection in a horoscope. This dosha is believed to cause extreme marital disharmony, unhappiness in relationships, separation from spouse, divorce and in some instances, is said to cause the sudden demise of the spouse, often soon after the marriage. A Mangal Dosha can also cause a delay in marriage. According to Vedic astrology, the placement of Mars also greatly influences the finances, health, progress in life, relationship with others and mental peace of an individual.

There are several astrological remedies that can reduce or remove the malefic influences of Mars from one’s life. Drawing up an accurate horoscope, from an experienced astrologer, helps identify this dosha. This is the first step in finding effective astrological remedies that can elevate the negative effects and suffering associated with this affliction and then performing these remedies can help lead a harmonious life.

The Tulsi vivah is a traditional and valuable remedy for the Mangal Dosha. This ritual is also known as the Vishnu vivah and in some places it is called Tulsi Shaligram vivah. It is an important Hindi ritual observed in the Hindu month of Kartik (October – November). This ritual is for those girls whose horoscope has mild or strong mangal dosha. The Tulsi Vivah involves performing the rituals of marriage between Lord Vishnu (Saaligram) and the tulsi plant. The tulsi plant is sacred to Hindus and is believed to be the incarnate of goddess Mahalaxmi. This plant represents chastity, purity and piety. The Tulsi vivah negates the inauspicious influences of Mars and protects the person from its negative influences. This ceremony also removes the obstacles that cause a delay in marriage

The tulsi vivah is celebrated by Hindus every year on the 11th day of the waxing moon phase of Kartik to the full moon day of Kartik (Kartik purnima). A traditional Hindu marriage ceremony is performed between Saaligram and Tulsi. The rituals include adorning the plant in wedding finery, such as draping a red garment around the sacred plant, decorating the plant with vermilion, red bangles and red bindis. A mangalsutra made of dried turmeric root is tied around the plant, as a symbol of the marital union.

After the tulsi vivah, a Manglik bride bathes in the water that contains the leaves of the tulsi plant. This removes the malefic influences of Mars. The bride also wears a necklace made of dried tulsi beads. This symbolizes conquering the fear of death.

Tulsi Vivah or Vishnu Vivah is a common puja which can be done, if you are facing delays in your marriage. Delay in marriage can also be due to other factors like malefic planets placement in the 7th house of the horoscope.

If you have Obstacles / Delays in your Marriage, I have the Answers. Get your Kundli checked for why delays is taking place in your marriage. Look forward to help you with this Divine Knowledge. Order a Detailed Marriage Report.

How to reduce mangal dosha effects