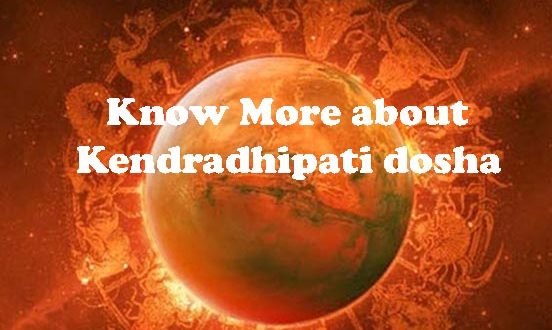 What does Kendradhipati dosha mean in Vedic Astrology

In a horoscope when a planet owns the trikona house and also the kendra house, it is known as a Yogakarka planet.  In other words it is a Raj Yoga planet.  This is true in case of Taurus and Libra as ascendant because Saturn owns the Kendra and trokona houses becoming the Yogakarka planet. This is also true for Capricorn and Aquarius where Venus becomes the yogakarka planet.

According to Indian sages there is another probability in a birth chart where the planet owns only the Kendra houses.  This is true when the ascendant is Gemini, Virgo, Sagittarius or Pisces. When lord of Kendra houses is in the Kendra, they form the Kendradipati Dosha.

Kendradipati dosha is not really a very bad dosha in real sense. Yet it can bring obstructions and obstacles in life. If I can explain it in a simple way, when Lord of the Kendra houses is in the Kendra, it is said to form this dosha. However the lord of the 1st house is exempt from forming the kendradipati dosha, because as explained above the first house is Kendra and also trikona. Also for dual signs 7th lord becomes badhaka planet.

You see the Kendra houses also known as the “angular” house, represent most important aspects of natives life. The first house is self, the 4th house is house, property, comforts. The 7th house is relationship and the 10th house is profession. Kendradipati dosha is formed with planets Mercury and Jupiter.  As both planets Mercury and Jupiter are not aggressive, hostile or forceful planet, they make a person generous, compromising and giving.  Many times the giving and compromising attitude can be huge, bringing trouble, loss and severe disadvantage to the native. Here the monetary or personal loss is not forced upon him by others, but the native lacks the ability to defend his rights and makes a compromise and is ready to make adjustments in life. It becomes a pattern in life where others take advantage of the native, and the native makes adjustments when ever challenges arise.

When Kendradipati dosha is formed:

When Sagittarius is ascendant, Jupiter rules the first house and 4th house. Mercury rules the 7th and 10th house. Here Mercury will form the kendradipati dosha. Mercury is the badaka lord.

When Pisces is the ascendant, Jupiter rules the first house and 10th house. Mercury rules the 4th house and 7th house. Here Mercury can form the kendradipati dosha. Mercury is the badaka lord.

One thing to note that planet forming the kendradipati dosha should be in the Kendra houses, else the dosha is not formed. The dosha is much more during mahadasha and antardasha of the planet. Dosha gets removed with conjunctions and other planetary conditions.

Remedies of Mercury or Jupiter may be applied for reducing the effects of this dosha.