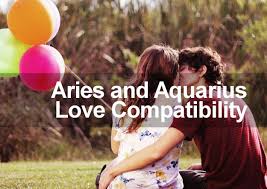 We all are bound to meet a match that is not of the same calibre as ours. With that in mind, it is best to weigh on your options and know what to anticipate from a member of the opposite sex, even an opposite star. Let’s take Aries and Aquarius for instance – trying to consider two sides of the coin and how the outcome may be if the two are together.

On the norm, an Aquarius man is the type that loves to explore and weigh out on the available options. Along these lines, it is also worth noting that the same unequivocally is observable with an Aries woman – she is the domineering type. Full of pride and love to be in control of any unfamiliar environment that she comes into contact with. In this case, the Aquarius man.

An Aquarius Woman And An Aries Man

In this case, the only outcome is that the entirety of the whole undertaking will be full of unforeseen events, recklessness, not to forget breathtaking. This is because unlike the former compatibility, with this one, both love to trespass the boundaries of their star and are willing to try things out without having to be in control. As such, this is bound to be a much better rendition of the former

How Thing May Actually Turn Out between Aries and Aquarius.

Considering that either of the above combinations have transpired, then their first time out together will most definitely be one to watch. The naivety of the Aries mate might somewhat be mistaken to be foolishness by the opposite Aquarius mate. The only way that these two can be able to connect in such a case is based on the ground that they both feel totally different from one another – fire and water.

So, how does each get to play out during their first time out? For one, in order to make the Aquarius man let you in, then you as the Aries should in this case play it totally cool. Don’t be in a rush. Remember that this kind is reserved and observant before making a decision. On the other hand, for you to make the Aquarius lady let you pass here personal boundary, one word – be that gentleman.

From the foregoing, it is clear that though it may seem impossible for these two signs to be compatible sexually, it is possible. With the condition that either parties don’t play the commanding type and acknowledge the fact that sexuality is a two way traffic. If this setback is bypassed, then their desire to explore makes them a perfect sexual match.

Withal, as a parting gift, each of these parties have their well-known sensitive zones which the other party will find worth exploring. Though some zones may utterly go beyond the personal space which these parties regard as an infringement of privacy, it is worth trying out. Though it is rare for a sexual relationship to lead to marriage between these two signs, it is best for experimentation!