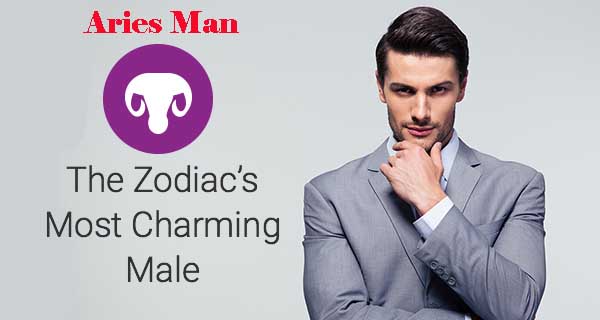 Aries Man in Love | Know About Aries male | What Aries Like

The Aries man knows what he wants and, more often than not, he knows exactly how to get it. He is ambitious and knows which way he is headed. He has a clear vision about the goals he wants to achieve and remains undeterred by whatever challenges crop up along the way. Although you may notice him at first due to his looks or for the impressive manner in which he carries himself, it’s his dynamite personality which will impress you and what leaves a lasting impression.

Likeable and popular, the Aries man has plenty of friends. He has an optimistic bent of mind and truly believes that anything and everything is possible to achieve in life. He is straightforward and will speak his truth without mincing or sugar coating his words. He is spontaneous and enthusiastic and may habitually venture into areas others may dread to tread. The Aries man is adventurous and enjoys the thrill that new, novel experiences bring. Although he is self-reliant, he seeks the company of people as; he is, at heart, an absolute sociable being.

Whether it’s his love life or his career, the Aries man knows his mind. When he meets someone he finds truly special, he will express his interest openly. If he likes what he sees, he will pursue his love interest with zeal and determination and will do his all to sweep his loved one right off her feet. Not one to wait and hope that things fall in place, he will relentlessly pursue the one he wants, which may make him seem like he is too aggressive. When it comes to dating the Aries man, he is exciting to be around and with him there is never a dull moment. With him, expect the unexpected, as he lives for the moment.

The Aries man draws women to himself effortlessly and he is frequently surrounded by them. He is flirtatious and this makes him seem like a Casanova. Yet, when the Aries man falls in love, he is and stays loyal to the one he loves. If his romantic relationship is on shaky ground, the Aries man may lose interest and stray.

The Aries man likes to know everything that is going on in his partner’s life and may try to influence the decisions and choices his partner makes. This may make him seem controlling, yet, as he values achievement, he gives ample space and support to his partner to realize her own aspirations

The Aries Man in love is a direct and forthright lover. Aries don’t generally play mind games, and you will typically know exactly where you stand when dating the Aries. They can sometimes be relatively aggressive and domineering partners, but it’s done in a genuine, enthusiastic and bold manner which is hard to find fault with. Overall the excitement of dating the Aries overrides their take charge attitude.

The Aries in love doesn’t want a weak partner

Whether male or female it’s worth noting that Aries don’t want weak partners. Just because they tend towards being dominating it doesn’t mean they don’t want to work for it! Quite the opposite, they often get bored rapidly with a partner who is a pushover. They typically do best with an equally feisty and confident lover.

The Aries in love is hot!

The Aries outgoing and friendly manner is often welcomed in social situations, and they typically have a wide selection of friends who welcome their enthusiasm and energy. Due to a combination of this and the above bold approach to love Aries often have a higher than average number of lovers before finding that special someone. This is a result of their confidence, zest for life and sex appeal which draws attention like moths to a flame.

Aries is one of the most physically protective signs of the Zodiac, typically not hesitating to risk life or limb if a loved one is in danger. The flip side to this is that they rarely will back down from a fight or challenge, no matter how bad the odds may initially appear. Courageous and full of integrity, it’s hard not to admire them in this area.

The Aries in love may be jealous

The Aries in love may become jealous fairly easily. More to the point, if they’re jealous you’ll hear about it sooner rather than later. This isn’t a person who withdraws to ponder such things – they take the direct approach to confrontation. Their openness is a good thing in this instance as they don’t sit back and fester in anguish, but boldly explain themselves.