India is a diverse country with different languages,  food, cultures and traditions. Many elders are not comfortable with their children going for a Inter Caste Marriage. Their children are holding modern views and do not bother about customs and traditions when it comes to choosing a life partner and are more comfortable with having a partner which has similar likes and dislikes, irrespective of caste, race and creed. Vedic Astrology horoscopes can tell us very easily if yoga for Inter caste marriage is there in the natives horoscopes. It can also tell us the likelihood of such a marriage.

The 7th house is the house of spouse , marriage and marital life.  The 7th house, its lord and planet Venus represent wife in a male horoscope. While a 7th house, 7th lord and Jupiter represent husband in a female horoscope. The 2nd house and its lord represent extension of family. The 9th house and the 5th house signify the religion and customs. If these houses and their lord are afflicted by Saturn, Rahu and Mars the native will marry outside its caste and can be outside of religion also.  As Jupiter is the significator of religion and if there is strong affliction to Jupiter, the native will change religion after marriage.

There are many planetary combinations in a horoscope which can bring inter caste marriages, some of which are given below:

Below if a horoscope of a native who had Inter caste Love Marriage against the wishes of Parents. 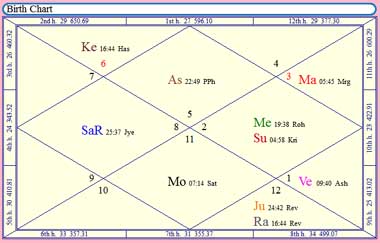 Aquarius is the 7th house lord and is a natural malefic and retrograde in the horoscope. Saturn not only is a malefic but has aspect of Rahu, which is debilitated in the Navamsha chart. The second house which is for extension of family has aspect of Mars and Rahu. 5th house is for romance and 5th lord Jupiter is conjoined with Rahu in the 8th house. 5th house also has aspect of Mars. The second house lord Mercury has aspect of Saturn and Ketu. Therefore we can see that the second house and its lord and 7th house and its lord, which are the prime significator of marriage are severely afflicted. 5th lord Jupiter conjoined with Rahu gave the native love marriage. The native did not bother about customs and traditions and did a inter caste marriage.

If you want to know when will you get married, What is your marriage Age. How will be your married life. Nature of spouse. Will there be peace, love, happiness in your life after marriage. Are you Manglik or not Manglik. Get all answers and more information by choosing our paid services.

Do planets for Love Marriage support you in your Horoscope

What is Love Marriage in Astrology Love marriage is marriage which is decided primarily by ...