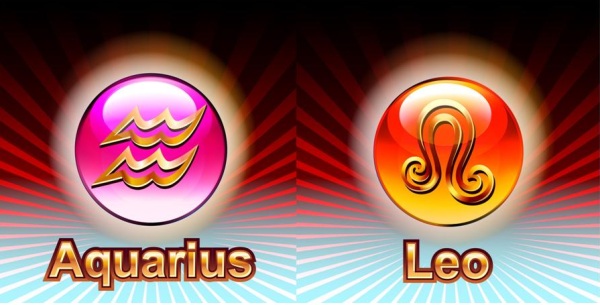 This is a combination of personality versus collectivity, truly unconventional, even controversial but an excellent one. It is relationship of two people from different planets. There will be attracted towards each other, but at the same time there would be lot of differences. However these two have great potential as a partner and if they can agree on their distinct roles, they can accomplish more than any other combination. As their love is truly heavenly they can remain united but at the same time do not cling to one another or stifle each other. They tend to cooperative with each other on most occasions, helping each other out when necessary. Their home remains a place of laughter, joy and security.

Comparing the traits of both, Leo native is independent, rash in temper, faithful, fond of the opposite sex. Will be of commanding and bossing nature and dominating. Have great affection for the opposite sex. Frank, warm hearted, and independent, someone who cannot tolerate any restriction. Leo male loves his home, partner and children, Leo female will be ambitious and ideal. She is a good organizer and can manage her home ideally, will be a good host and commands social and prominent position, she is affectionate and responsible.

On the other hand a Aquarius native is intelligent, generous, have good memory, good concentration, self-controlled, humane and impersonal. Stable in a relationship but has strong likes and dislikes. Highly social but choosy about friends. Male pay less attention to partner and family, but are very kind and sympathetic. Aquarius female are unconventional, want satisfaction and cooperation from partner, share responsibilities, work and duties.

When united both have the energy to move mountains. Romantically these two are stoppable, but the fact remains that the energy between them is volatile and when they differ on things they seldom will compromise.  Despite all dissimilarities, this can be a powerful relationship as each partner has a separate sphere of influence his or her own world. Yet each will find in the other that solace of deepest understanding which can take this relationship forward.

Please find the monthly readings for the month of February 2018. These readings are based ...