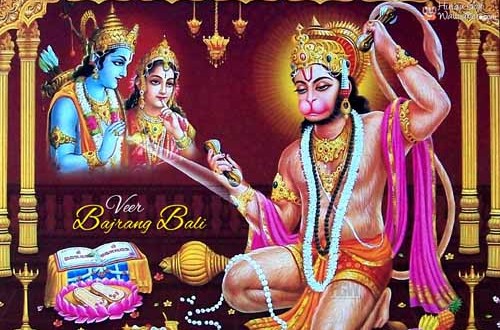 Mangalwar vrat – Tuesday Fast for those suffering from Mars

Lord Hanuman is honored for his strength, vitality and for his loyalty and devotion for Lord Rama. Hanuman is known by different names including Anjaneya, Bajarangabali, Anjani Putra and Maruti.  He is the son of Vayu and Anjani. Hanuman was a leading force in the war against Ravana; he played a central role in this war and helped bring Sita back to Rama. When prayed to with deep devotion, Hanuman bestows his devotees with good health, protects from all troubles in life, and protects from evil. Tuesday is dedicated to the worship of Lord Hanuman.

The Hanuman Chalisa, which is a prayer dedicated to Hanuman, is read on this day and is known to bring spectacular results. Praying to Hanuman is believed to bring instantaneous and miraculous results.

Tuesday or Mangalvar gets its name from the fiery planet Mars. The color red is the color associated with Tuesday. The Tuesday fast is undertaken for relief from troubles in life and for good health. Mars can have a positive or negative influence on a person’s life, depending on the position of this planet in the birth horoscope of the devotee. Fasting on Tuesdays is known to ward off the malefic influence of Mars.

Devotees who fast on Tuesdays do so for the entire day, beginning at dawn. A single meal can be had and usually contains jaggery and wheat after sunset. This fast is often undertaken for 21 consecutive Tuesdays, without a break in between. The Hanuman Chalisa is read aloud with the morning prayers. This can be repeated again, in the evening, if time permits. Offerings to Hanuman include Red flowers, Orange Sindoor with Chameli / Jasmine oil, Laddo and Gur. Prayers can be offered at home or at a Hanuman temple.

We pray to the Lord Hanuman, who is the greatest server and messenger of the Lord incarnate, Shree Rama.

Let me pray to the one who is swift as thought (manojavam-), the one who is more powerful than the wind (marut.tulya.vegam-), the one who has conquered his senses (jitendriyam-), the one who is supreme among all intelligent beings, the son of the wind-god (vaataatmajam-), the commander of the army of forest creatures (vaanar.yooth.mukhyam-), Let me find refuge in Lord Rama’s Messenger, the incomparable Lord Hanuman. Please accept me and my prayers at your feet.

Mantras for Hanuman, when chanted with purity of heart and deep faith bring the desired results, within a short period of time. ‘Om Hanumate Namah’ is a powerful mantra dedicated to Hanuman and is chanted for power, vitality and physical strength.

Lord Hanuman is revered by all his devotees. Hanuman is the immortal one, and can protect his devotees from harm, from the harmful influences of planets, like Mars and Saturn. Praying for better conditions in life, better intellectual capacities, for courage and for mental fortitude brings extraordinary results. Praying to lord Hanuman, with a pure heart and unshakable devotion, ensures that he comes instantly to the rescue.

Astrologer Navneet Khanna, is a former World Bank & SIDA consultant, he has held many prestigious projects in India and Africa before settling down in his native place, near Chandigarh and following his passion in Vedic Astrology. Navneet is very scientific and logical in his Predictions. He reasons his predictions because of which he has a worldwide following and people from many countries solve their problems with his help. He is an expert in Marriage and Love Relationship. In Marriage Matching he does analysis of Guna Milan and also Grah Milan (Matching of the Planets) and will tell you effects and remedies of Nadi Dosha, Bhakoot Dosha & Gana Dosha if present. He is an Expert Astrologer on Many Indian & Foreign Websites like myastrologysigns.com and a frequent writer for many national and international websites and magazines. Navneet believes that Vedic Astrology is a vast subject, it is an ocean of knowledge and wisdom. It is simply up to the individual to jump into the ocean and extract the pearls. With his vast experience on occult subjects he has been associated with leading astrologers in India to promote astrology. Navneet Khanna believes that the energy and inspiration behind him is the Blessings of the Almighty. You may contact him on his number 0091-9417884861 .
@astronavneet
Previous Seek Astrology help and use stars to your advantage
Next Astrology Remedies for depression

What is Mangal Dosha – In Vedic astrology the placement of Mars in the ...