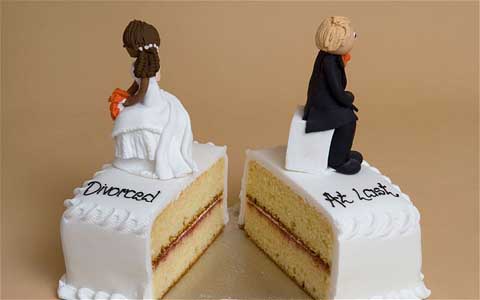 Marriage failures – How Astrology can help!

Once upon a time Men were the predominant race and the fair sex were subordinate to them. Women had only the responsibility of giving birth to children and look after them till they became adults supervised by the male chauvinists. Till very recently they did their job very well and produced lot many children until after they reached their fifties. Men provided all their wants and were the bread winners. And chastity was considered as the best virtue of a woman even endorsed by the epics and scriptures. In this process they had to compromise a lot for being subservient to their men folk and one day it was natural that they revolted. And to the men folk WIFE became “Worry Invited For Ever”.

So men started to choose their women and the main instrument in selection was a Horoscope Matching between the two. Astrology came to their rescue and it was ascertained that a woman will bring progress and happiness to men and the axioms in Astrology suited their purpose. Kuja Dosha and many other similar axioms were invented and it was all geared to the prosperity of men. I am giving an example of the definition of Kuja Dosha (Mars Affliction).

Which means that if Mars is posted in the 2nd, 4th, 7th, 8th and 12th houses without aspects or conjunctions of benefic planets, sure she will kill her husband. And such girls were desisted for marriage.

And what about the husbands. If they had Kuja Dosha in their horoscopes, women were sacrificed so that they could marry again. So it was always a one sided affair in favour of the men. Men made it certain that women did not get any education thus ensuring that they never had the power of thinking.

Then things changed and slowly the girls too started receiving education and they started to have their own say in matters regarding marriage. But the rules of horoscope matching did not undergo suitable changes and astrologers continued to follow the age old axioms in determining the compatibility of horoscopes for marriage.

And the result was disappointing. These days lot of marriages do fail for want of compatibility in many essential factors of life as represented by the different houses of  a horoscope and daily it is on the increase. Let us now look at the reasons for failure of marriages as per a senior marriage counselor and a clinical psychologist Dr.Val Farmer  which I am fully convinced of as a practicing astrologer for more than five decades. Let us now associate those reasons with the respective houses in a horoscope.

1. Poor boundaries. Engaging in intimate conversations with members of the opposite sex leads to emotional experiences that cloud judgment, trigger fantasy life, and progress toward physical intimacies outside of marriage. The connection and acceptance found in an illicit relationship diverts energy away from solving problems with one’s spouse. Confiding about marital problems with a sympathetic listener provides a contrasting experience to whatever dissatisfaction might be present in the marriage. The seventh house of a horoscope is responsible for this.

2. Selfishness. There needs to be fairness in the distribution of work and responsibility within the relationship. This willingness to extend oneself also pertains to meeting emotional needs. Placing one’s desires consistently ahead of a partner’s emotional needs and responding only when it is a matter of convenience, demand or negotiations leaves a spouse feeling unloved. If too many important needs are neglected over time, the unloved spouse feels used or taken advantage of. Consistent lack of love interferes with a spouse’s willingness to give unselfishly in the relationship. When marriage partners don’t trust their needs will be met, they tend to meet their own needs first and become hesitant to share freely of themselves. Selfishness in its most destructive form involves control, manipulation, jealousy, possessiveness, demands and abuse in order to get one’s way. In milder forms, it is lack of consideration and respect. The first house incompatibility leads to this.

3. Disrespectful judgments. Marriage needs acceptance, admiration, appreciation and emotional safety. Feelings of anger and hurt follow when the process of exploring differences or contrasting opinions consistently degenerates into criticism, impatience, labeling, contempt, or discrediting one’s thoughts or feelings. It is disrespectful to try to change a spouse’s thinking by lecture, ridicule, threats, brainwashing, or negative aspersions. These perceived attacks on personality, character, intelligence or values undermine the mutual respect that forms the basis of love. The tendency is to retaliate in kind or else to withdraw and not share one’s ideas. It becomes hard to love or give of oneself when one feels unfairly judged or mistreated. The second house is normally the culprit.

4. Explosive, angry outbursts or rages. Anger can have a useful purpose if it is listened to and leads to dialogue and constructive problem-solving. However, anger can either create more anger or withdrawal, both of which interfere with effective communications. Unbridled and unpredictable tempers interfere with emotional safety and trust when spouses need to engage each other on emotional issues. The issues behind the anger get lost as the angry response is perceived as unjust, abusive and unwarranted. It is intimidating and controlling. Again an incompatible second house produces all these.

5. Lack of emotional intimacy. The lack of sharing one feelings, goals, hurts, struggles, joys and emotional details of one’s life lead to loneliness and sadness. Feelings of friendship and partnership come from being connected through interest, deep listening and empathy, mutual support, and sharing perspectives as confidants. Expectations for marriage include a desire for this soul-satisfying experience of being known, understood, loved, accepted and valued for who you are and having a place to turn for comfort and support. If this component of marriage is lacking, marital partners feel cheated of the essence of what they truly expect marriage should provide. The fifth house compatibility negates these tendencies.

6. Lack of affection and sexual fulfillment. When needs for sex and affection are not met, problems mushroom. Without affectionate gestures and words, love seems hollow and not as believable. People don’t marry to get a roommate. They expect to have an active and fulfilling sexual life. Chronic anger and conflict dampen a couple’s willingness to be affectionate with each other. These are part of the seventh house of a horoscope.

7. Leading separate lives. Relationships also suffer when couples don’t mesh their lives through shared activities, recreational companionship or spending enough time together. Living too independently from each other takes away connection and joy from the relationship. Couples need to function as a team when it comes to parenting, managing a household, sharing finances, and relating to relatives. They need to consult with each other about important decisions and coordinate their schedules. Time needs to be set aside to enjoy conversation, adventures, common interests, vacations and fun. Time spent together should be anticipated with pleasure. Without this component, couples drift apart and have little in common. An incompatible fourth and seventh house could lead to all these.

8. Communication is a painful process. A marriage with too much conflict, hostility, blame, criticism, defensiveness, and belligerent verbal attacks seems like life with an enemy instead of a friend. Marriage needs to be a place of safety, a haven, a place of love and refuge, not a war zone. Always being “right,” being rigid, judgmental, or easily angered or flooded with emotion disrupt communication before problems can be solved. Avoidance of conflict is even a bigger problem as the emotional connection is lost when couples don’t share opinions and attempt to resolve conflict. When repeated attempts to solve problems fail, one partner gives up and starts to withdraw emotionally. Beware of the sixth house and second house of the horoscope.

9. Destructive habits and addictions. Addictions have great power to be placed in front of the needs and happiness of a partner. Betrayal, hurt, anger and pain follow the wake of addictive behavior. Addictions need to be treated to protect the integrity of the marriage. You must check the eighth and twelfth house compatibility to even out these problems.

10. Dishonesty, laziness and other character defects. Basic trust and respect underlie love and form the basis of relationships. Lies, deceit, disloyalty, secret habits, or emotional dishonesty about thoughts or feelings destroy trust and respect. Spouses who willingly don’t take or follow through with their personal responsibilities unfairly shift those burdens to their partner. Marriage is a partnership between equals, not a parent/child relationship. The third and ninth houses compatibility can ensure that these problems do not happen in a relationship.

Thus you can see that if two horoscopes match in respect of all the houses or at least in most of the houses, a successful marriage can be resulted with love and affection between the partners.

The Grading and scaling thereof  of the match percentage is my own based on my experience in Astrology. Here you can see in the example that there is no Male to Female compatibility while Female to Male compatibility is there resulting in a net matching of 67.31% which is below average and therefore not suitable for marriage.

Those who wish to have their horoscope compatibility report for marriage read can have it from the button below.

I am a retired Software architect with more than 53 years of experience in Software development, EDP Management and MIS starting from 1964 and belong to the first batch of computer professionals in India. My hobby is Astrological research. I am 74 years young. I have devised a scientific and mathematical method of evaluating a horoscope similar to the Mark Sheet you receive from Board of Schools or Universities after you complete a degree or diploma course of study using which you will know where you stand among your peers. The uniqueness of this method of evaluation is that you can use it in all schools of thought in Astrology including the Sayana System used by Westerners and the strength does not vary at all except for small decimal values. Read my blog navagrahastro.blogspot.in and if interested, come through Paid services and your evaluation report in detail will be sent to you by email. I do not believe in remedies to propitiate the planets or Gods by shortcut means like wearing a stone, doing Poojas and Homas using a middleman like priest or pundit or anyone who has made it a profession. Nor do I believe in penance or sacrifices done by hurting yourself or someone else. I believe that Prayers to God by the self is the only means of getting His blessings which can ease our problems of mind and body and help us in happy living. Brokers are not entertained by God in this regard.
@ramachandran
Previous Astrology remedies for improving husband wife relationship
Next Auspicious Day and Time to Enter New House – Griha Pravesh

10 most common reasons for divorce in marriage

You need to understand that no marriage is perfect. No matter how much you think ...