It is everybody’s dream to become a parent one day. Becoming a parent is something special, a feeling and emotion that you can never know till you become one. Everyone wants to do the most and the best for their children. To dream for them a life and world that is much more loving, beautiful and better than they themselves have lived. A name is the identity of any person and it will be also for your child. Special emphasis is given to the name in Hindu culture. It is believed that the qualities of the name influence the character and personality of the child. For example a child with the name “Shakti” will be strong, powerful, ability to accept challenges. A name “Gyanchand” the child will be knowledgeable and have qualities of the Moon which is calm, emotional, sensitive, helpful, being a Naamkaran has been an old tradition in Indian culture. A name like Sumeer signifies a child who is lord of wisdom. A name after a deity or  god signifies the qualities in her personality and character. A name Durga a girl will be bold, full of energy, powerful, aggressive, trustworthy and daring.

Choosing a Name based upon Birth Nakshatra:

Some people choose random name for their children based upon individual preferences.  Good names are too beneficial and lucky, short and sweet name make good vibration, it make special identity in the life.  Therefore emphasis should be made on a short and sweet name but based upon the proper astrology system. A proper name not only enhances the character, personality of the child but also proves lucky for him. There are 27 Nakshtras in Vedic astrology which are further divided into 4 charan or Pada. Each charan or pada is assigned a sound which becomes the name alphabet of the person.

The List of Name Alphabet belonging to various Nakshatras is given below: 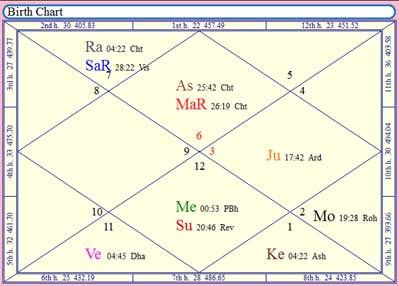 So the Boys name based on above Birth Nakshatra will be as below:

And the Girls name based on above Birth Nakshatra will be as below:

Some Important Points to remember when you looking for Name Alphabet based upon Birth Nakshtras are given below:

There is no difference in between श and स and also व and ब. Also to be noted is that names will not start with ङ , ञ, ण. If Nakshtra name alphabet indicate these alphabets then घ may be replaced instead of ङ, द instead of ञ and प instead of ण.

If you are looking for assistance in finding the Appropriate Alphabet and Lucky Name for your child you can avail the premium services.

Traditionally families in India choose the baby’s name based upon the name alphabet and also ...

Hindu Names with Alphabet U

Traditionally families in India choose the baby’s name based upon the name alphabet and also ...