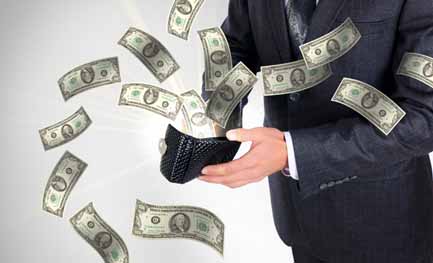 Vasumathi Yoga – For Wealth Riches and Money in Vedic Astrology

Vasumathi Yoga is formed when benefics occupy the upachyas houses (3,6,10,11) either from lagan or the Moon.

The native born with Vasumathi Yoga will be courageous, will not shy away from responsibilities. The native will have lot of initiative to achieve something in life. The native will earn lot of money primarily because of his own efforts. Vasumathi Yoga has more to do with money than with anything else.  The upachya houses are the ones  which gives materialistic gains, benefics in upachyas houses bring these gains to the native.

Scholars of Vedic astrology generally read the Vasumathi yoga from lagan as well as moon. It is seen that Vasumathi yoga formed in reference to lagan or ascendant is more influential than the one formed with reference to the Moon. If the upachayas happen to be exaltation place of the planet, the yoga becomes very powerful while the reverse takes place when the upachayas happen to be a debilitated place of that planet.   The scholars are also silent on how many  benefics and houses should be occupied. But the simple rule that may be understood is the more the better. If three benefics occupy three upachyas houses out of the four upachyas houses then it will be more stronger  yoga than a horoscope which has two benefics occupying two upachyas houses. 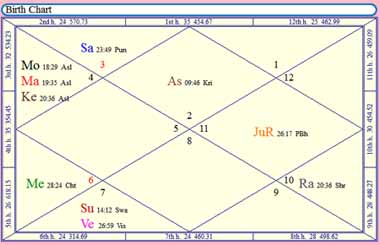 In the above birth chart  3rd house, the 6th house and the 10th house are occupied respectively by the Moon, Venus and Jupiter indicating the presence of Vasumathi Yoga.  Out of the three planets that have caused the yoga Venus is the most powerful and therefore the native will especially benefit during the main or the sub period of Venus. It is purely a rare instance that all four upachyas  house may be occupied.