Kundli matching is that term that is commonly heard in all Hindu households as the time for someone’s marriage comes nearer. All marriages in the Hindu community highly rely upon this custom to predict the compatibility between the match and to judge if the couple would lead a happy life together.

Despite how common and essential this ritual is believed to be for any Hindu marriages, the current generation doesn’t seem to agree with the views of their ancestors, or even their parents.

There are many people and families who blindly rely on Kundli matching, but there are also many who believe the entire concept of Kundli matching as mere superstition. They consider that only emotions should take the center place when deciding on choosing a partner.

A reason why there is doubt regarding this auspicious ritual is because of the many vague astrology reports available there. These reports lack precision, have tons of errors, don’t predict things of importance and the speculations made are very much generalized. People learn to look at astrology as something that works on the norms of the psychology of the general public and hence the generalization.

The aversion against astrology and all the processes within goes away when one gets to understand the mechanism and also find reputed and trustworthy astrologers who never disappoint.

Following the ‘Ashtakoota’ method, they predict the compatibility between the individual as well as between their Kundli. As the name suggests, there are about eight aspects that are considered in this method. The astrologers than give scores to the couple based on how many of the ‘Gunnas’ between the two individual’s Kundli matches. There are total 36 total gunnas and of these 36 points, the couple must attain at least 18 for the match to be counted as a favorable one.

Another reason that many people find it hard to believe in Kundli matching is because of the many false facts that are widely spread amongst the general public. Astrology is not a commonly discussed topic and when it is, people are at a lot of times filled with a lot of misconceptions about this field.

Of the countless myths that are prominent in the minds of many, let us dive into busting a few of them.

One of the most viral ‘myth’ is that for love marriage, Kundli matching keeps hardly any importance. Though people indeed have an upper hand in love marriages as they already know the partner they are about to marry. There is already an awareness of the compatibility between the couple and for this reason; people find it useless to get their Kundli matched.

Truth: Kundli matching is important for both arranged AND love marriage. For a marriage to work and be successful a lot more than just compatibility and love is needed. Kundli matching looks over all those uncertain and unpredictable areas and lets one know about how their marriage would be.

In the Ashtakoota method or Gunn Milan method, it IS presumed that if a match gets a score below 18 the marriage could be a very complicated one. But despite all of that, it doesn’t mean that getting a low score means that one needs to give up on their decided match or love simply based on this. There is also this belief that if the kundlis of the two individuals comprises of any dosh, the marriage must be deemed successful and one should consider searching for someone else.

Truth: If after matching of Kundlis, the score in the Gunn Milan method comes out to be lower than 18 or if there is any dosh found in the kundlis, the marriage need not be abandoned. There are many astrological remedies and rituals present that can help eliminate or nullify these doshas and the possible difficulties due to the low scores.

Though this method is surely one of the most widely used methods, it is NOT the only method that is used. Ashtakoota method has been so commonly used that people have started thinking that when someone is talking about getting their Kundli matched, they are talking about this process. They even sometimes replace the words ‘Kundli matching’ with the ‘Ashtakoota method,’ because why not?

Truth: There are other methods available for Kundli matching and it depends from astrologer to astrologer on what method one opts for. People even get to decide by which method they hope to get their Kundli matched.

Other available methods are the Dashkoota method, Duodashkoot method, etc.

This is a belief that many believe and the reason behind this thought is valid. Astrology isn’t something that is limited to just India or Hindu culture. Even people in western countries believe in astrology and similarly, many countries have people, other than Hindus who do believe in Kundli matching before marriage.

Truth: Astrology is getting more and more popular in western countries. Though they might not be using the same pattern or method as those used in the Hindu cultures, they do seem to be following customs very similar to that of Kundli matching. And in addition to India, Nepal, Sri-Lanka, Bhutan, Malaysia, etc. are some of the Asian countries which seemed to have shown certain numbers of people who showed interest and trust in Kundli matching.

Kundli matching has proven its worth several times, it doesn’t get enough credit for the success of all the arranged marriages as well as love marriages. It is not written anywhere that if one doesn’t get their Kundlis matched, they would face trouble, but if they DO get their Kundlis matched, the chances of facing trouble decreases. It ensures that nothing is standing between a couple and a happy married life. 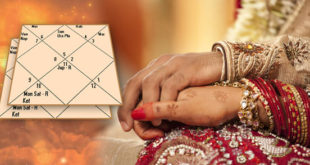 Scientific Matching of Horoscopes for Marriage

Once upon a time, Men were the predominant race and the fair sex were subordinate ...