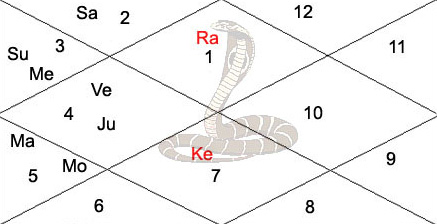 Kaal Sarp Yog is an astrological formation between Rahu, the Moon’s North Node and its south node, Ketu.  It is reckoned to be a terrible planetary configuration in any horoscope, holding back other planetary benefits to individuals.

Kaalsarp Dosh is a combination of two words Kaal i.e. Time and Sarp i.e. snake – essentially all the planets being aligned within the travel arc of Rahu and Ketu in a certain period.  This signifies severe misfortunes and the native has to go through various obstacles and problems in his life.  Kalsarp dosha are of two types Ascending and Descending. If all planets are eatern by Rahu mouth then it is a ascending Kaalsarp dosha. If all the planets are in back of Rahu then it is a descending Kaalsarp dosha. There are  12 different types of Kaalsarp dosha depending upon the house they are in the horoscope, each named after a major snake from the past: Anandt, Kulik, Vasuki, Shankhapal, Padma, Mahapadma, Takshak, Karkotaka, Shankhchud, Ghaatak, Vishdhar and Sheshnag,  warn of different types of disasters indicated in the individual’s astrological chart.

This phenomenon is countered by some scholars.  They claim that there is no reference whatsoever to kaalsarp dosha in any of the ancient texts, either in Brihat Parashara Hora Shastra, or Phaldeepika or Bhihat Samhita.  They refute any mention of kaalsarp in the original texts and warn against being taken for a ride by modern day charlatans out to make money from people’s fears.

The most celebrated example they point out to is that of India’s first Prime Minister, Jawaharlal Nehru, whose horoscope indicated to kalsarp dosha —- yet his life pinnacled as Prime Minister of India and the man who laid the foundation of its industrial evolution, but many are of the view that despite him being elevated to the position of Prime minister of India, his personal life was a big disaster and troublesome.

While the Kalsarp Dosha itself is subject of great controversy in our times, a number of remedies for this condition are also on offer for assistance in countering its negative effects. Despite this battle between astrologers, remedies are offered against the worst impact of the negativity of the kaalsarp.

Many of these remedies are rather simple and are do-it-yourself type:

To Get your Horoscope Analysed for KaalSarp Dosha, Choose the Paid service below

KalSarp Dosha- Analysis of an Horoscope

Kaal Sarp dosh is one of the most dreaded dosha considered these days in Vedic ...