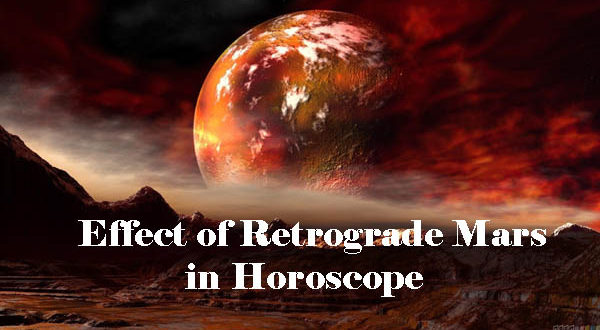 Effects of Retrograde Mars in Birth Chart or Transit

From time to time, people can read or hear astrologers talking about retrograde planets, and retrograde Mars in particular can have significant and far-reaching consequences. This applies to both your horoscope, as well as your life. As you probably know, celestial bodies have always been connected with various events, major or otherwise, so the planet of war should be interesting in its own right.

How can a planet be retrograde and what does that mean?

Well, from Earth, planets and other celestial bodies appear to move differently than they actually do. All the planets in the Solar system revolve around the Sun, but from our perspective, here on Earth, it would seem like the planets occasionally “stop” moving and then reverse in a different direction – when that happens, those planets are referred to as “retrograde”, at least until their regular pattern resumes. As for Mars, the planet could remain stationary from our perspective for up to five days and it becomes retrograde once every two years. The length of this period for Mars is roughly 60-75 days.

The impact on horoscope of Retrograde Mars

In your birth chart, the planet of war is known to cause anger and strife, and in a retrograde period, all that negative energy is expected to shift direction. In this case, the direction is shifted inward. In other words, stress, anguish and passive aggression are associated with retrograde Mars and you will be the one experiencing them often. You will be far more prone to anger and lash out for no apparent reason. So a person with retrograde Mars in horoscope will be more aggressive and likely to be dominating by nature. He will be highly assertive and want things his way. In case the native does not get what he wants the person will be offended and restore to violence.

Impact of retrograde Mars during Transit

When Mars is retrograde during transit is felt universally. During this period, the overall state of aggressiveness may be exaggerated; therefore you will see a direct link between a retrograde Mars and an increase in road rage, traffic accidents, arguments, fights, conflicts between people and problems in love life.

People who have retrograde Mars in their birth chart tend to face extreme difficulties during this period and that is why they like to assert themselves and their presence. The aggressive nature will increase during transit of retrograde Mars. Mars stands for authority and leadership, so the retrograde Mars tends to turn everything the planet normally stands for upside down.

Essentially, the more calm and aloof people are better suited to restrain their inner demons, that will be running rampant in these troubled times. However, even they will experience far more difficulties maintaining their demeanor than they normally would.

Mars is also the planet of initiative and people who normally take initiative find it far more “prudent” to rely on others, and keep finding new obstacles coming their way, impeding their progress. They are also more vulnerable to outside aggression, which seems to be abundant during this period.

What can be done about Retrograde Mars?

Fortunately, Mars does not stay retrograde for long – only two, two and a half months; on the other hand, thanks to its proximity to the Sun, it also becomes retrograde far more often compared to planets that are further away, such as Uranus or Neptune. This means we need to learn to adapt to these phases and look at this not as a troublesome event – rather, it is merely the balance of the Universe restoring itself. While we continue to learn more about the Universe, it becomes evident that we are influenced by it far more than it is influenced by us – Unwise is the person who sees it as mere nonsense.