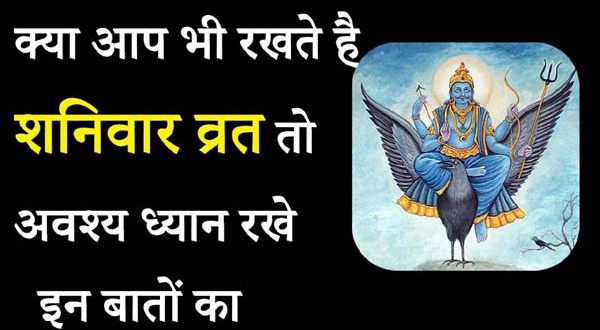 How to Keep fast on Saturday – Shanivar Vrat Vidhi

Saturday is dedicated to the planet Saturn. In Sanskrit, Saturn is known as Shani. In Hindu mythology, Saturn is the son of the Sun and Chayya. Saturn is much feared.  It is believed that Saturn’s influence is malefic and can bring misery, failure, and obstacles in a person’s life. Black and blue are the colors and the blue sapphire is the gem associated with this Saturn.

Saturn is a great teacher when it comes to life lessons and karmic truths. A person has to undergo great difficulties to be purified and to become aware of the higher truths of existence. On the other hand, Saturn rewards hard work and responsibility with great success. It is believed that Saturn has the power to change a person’s fortune instantaneously, be it for the better or worse.

In Hindu folklore, Saturn was rescued from Ravana by Hanuman. Saturn had, in return, promised not to bother Hanuman’s devotees. The effects of Saturn’s influence are particularly intense during the 7.5 years of Saturn’ transit in the horoscope. This period is known as Sade Sati.

In Vedic astrology, Saturn is a malefic influence to most people during the 7.5 years long transit in the horoscope. This period typically brings financial losses, failure, delays, unexplained obstacles, difficulties, and ill-health. Praying to Hanuman on Saturdays, during this transit period, brings relief from the intense difficulties that are commonly experienced during this time. A traditional lamp, which is a diya, is filled with mustard oil and lit in front of Hanuman to pacify Saturn.

People fast on Saturdays to appease Saturn. This fast is started on a Saturday and is continued for 11 or 51 consecutive Saturdays, without a break in between. This fast is typically started on the first Saturday of the Shukla Paksha of any month. The fast starts early in the morning and only one meal can be had during the day. Offerings to Saturn are usually of black color, such as black Kagmachi flowers and black Til. The Saturn Katha or the Shani vrat Katha is read aloud. A dish made of rice and black urad daal can be had after the sunset.

Chanting the Saturn beej mantra 108 times on a Saturday or if possible, everyday, can bring relief from hardships due to Saturn’s influence. The mantra is Shani Bija Om Sham Shanisharaya Namah.