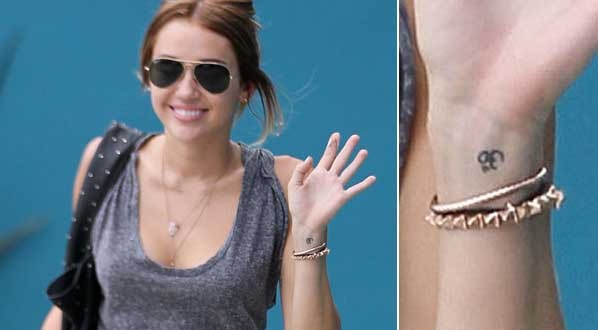 Miley Cyrus who is popular world over for the film Hannah Montana, love for India gets viral on the internet as she posts pictures of Lakshmi Puja at her residence. These pictures posted on popular social media site Instagram went viral in hours, especially with her Indian fans. The picture which has traditional Hindu prayer setup with Goddess being worshiped along with flowers, incense, diyas (lamps) and traditional Indian sweets. She captioned it as #Offering and #FruitBowl.

This 24 years who has had hits song like “We cant Stop” from album Bangerz which was released in 2013 and had enormous success in the television series Hannah Montana, is daughter of singer Billy Ray Cyrus. Miley Cyrus born on 23 November 1992 is a American singer with a wide following throughout the world. Born and raised in Tennessee, USA, she received enormous success in her teens with the television series and feature film Hannah Montana.

Miley Cyrus has at a very young age received many prestigious awards like MTV Video Music Award of the Year. Her single “Wrecking Ball” was her first single to reach number 1 on the Billboard Hot 100.

Born with a name of Destiny Hope Cyrus given by her parents belief that she would achieve great success in life. She was later given a short name “Smiley” because of her smile, the name was later shortened to “Miley”.  She has enormous success in her professional career at a very early stage as she was named 19th on the “Top 20 world Richest Female singers of all time with earning over $100 million at the age of just 17.

Her passion for Hinduism is not new as she has  “Om” tattooed on her left wrist as shown in the picture above. This Lakshmi Puja is for opportunities and growth in the year ahead. In one of her interviews in 2014 with ‘W’, one of the most popular fashion magazine in America she stated that ‘I love weed’ showing her strong like for vegetarianism. PETA (People for the Ethical Treatment of Animals) named her the “Sexiest Vegetarian Celebrity of 2015”.

(Lakshmi Puja at the House of Miley Cyrus)

As she is born on 23rd November 1992, her rising sign is Sagittarius. This is not a great period for her relationship. Earlier she had problems with  her co-star Liam Hemsworth, after 3 years of a relationship they called off their relationship in September 2013. She also has relationship problems when she was dating with Patrick Schwarzenegger son of Arnold Schwarzenegger. Miley Cyrus has been in the news for all the wrong reasons. She has been posing photos / selfies to get the attention she once had.  Certainly the period ahead is surely more challenging when it comes to professional and on the personal front. The good thing about her is you may love her or hate her but still you find people taking about her. People are wanting to know about what she is doing. In the world of social media, It is the publicity that matters in the end and Miley Cyrus will always be in the news.