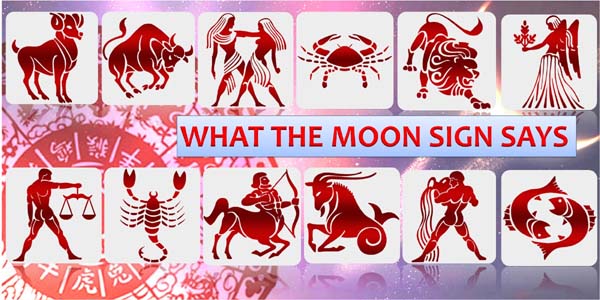 Significance of Moon Signs in Our Zodiac

What is a person Sun sign, is not rocket science. Everyone I have met, even people who say that they have no interest in astrology know about their Sun sign. Horoscopes are one thing which people read regularly in magazines and newspapers.

To understand the difference between Sun sign and Moon sign we need to understand what is Sun Sign. Sun at any given time will be moving in one of the 12 signs. The sign in which Sun is transiting will be the Sun Sign. In other words Sun sign is the sign which has Sun at the time of native’s birth. Sun Sign Astrology is very commonly followed in horoscopes columns that are available in magazines and newspapers world over. Horoscopes based on Sun sign are basically a western concept which is very popular world over.

The Dates of the each Sun Sign is given below. These are more popular in the western Astrology that you will get to read in magazines and Newspapers.

What the Sun Sign dates mean: These dates mean that for example on March 21 Sun will enter Aries and will stay till April 19th each year. Sun will enter Taurus on April 20 and stay in sign Taurus till May 20th and so on.

Moon sign which is also known as Rashi in Vedic Astrology is very important part of Hindu Astrology. As sun will transit each sign, similarly the Moon is also transiting one of the signs at the time of native’s birth. This becomes the Moon sign.

This means that the moon controls our senses and brings out any hidden characteristics upon subjection to stress and other emotional conditions. Here is a look at the significance of the moon signs to our Zodiac and how they eventually affect our personalities and relationships with our family members and friends.

The Aries moon gives people under it gives energy and motivation to accomplish certain goals. Such people are excitable, but may turn hostile or violent if provoked. They often refuse to be told what to do. Most athletes and lawyers have this moon sign.

The moon in Taurus represents people who are patient and conservative. They hate change and surround themselves with things they value. Their patient nature helps avoid rushing into making rash decisions when things are tough. Taurus moon helps individuals learn ways to avoid confrontation.

Gemini moon is associated with intelligence and hyperactivity. At the time when the moon is brightest, Geminians are thoughtful and full of ideas. The moon sign makes individuals love science and discovery.

The moon in Cancer is a passionate, calm and relaxed person. Cancer moon makes this person to be secretive and intuitive. Cancerians are very emotional. They are also insecure, oversensitive and moody, and may be temperamental.

People with their moon in Leo love attention and want to be treated well. They tend to be generous, loyal and spontaneous. Whatever the state, these people feel they can do anything. Their lively nature makes them playful.

People under the sign of the Virgo moon are honest and calm. They are intellects with a good memory. Additionally, they are caring and are the caregivers for sick or individuals. Virgins in their moon tend to be social and sensitive. They don’t like taking rash decisions and will take their time plan everything.

Libran moon represents social individuals who advocate for moderation in everything they do. People under this sign show too much affection to their loved ones and colleagues. Too much love for others makes them vulnerable to ill intentions of others. Such people are also generous, peaceful and sensual.

People with the moon in Scorpio are very temperamental. They think no one cares for them. They may be very private, especially when they think that nobody understands their actions or feelings.

The Sagittarian Moon represents individuals who are outgoing, athletic and generous. These people love freedom. They will be severely distressed if they are denied freedom. They love fun but are short-tempered.

Capricorn moon represents insensitive individuals who may not be understood. Capricorns work for long periods. They may be generous and caring. Material things make them happy.

Aquarians are inventive, perceptive and creative when the moon is brightest. These individuals are imaginative. They tend to listen to and accept other people’s opinions. Aquarians are not emotional.

Pisces moon sign represents people who can change mind easily and are easily affected by emotions. They Pisceans are tender and loving. They tend to take everything seriously and are often gloomy.

Find out your Moon sign / Rashi and also your Birth Nakshatra from below.