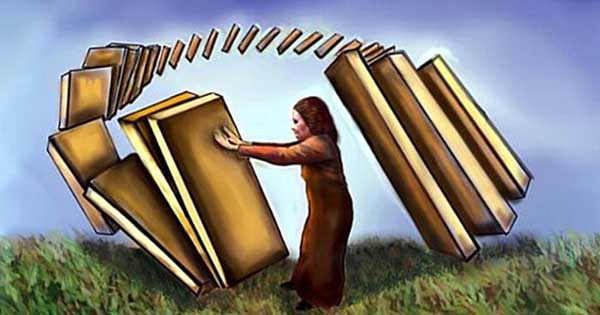 What is the Law of Karma in Hinduism and Buddhism

The word “Karma” is so popular these days in the west that during my recent visit to Europe I saw a graffiti on the wall which read “KARMA IS REAL – BE GOOD RECEIVE GOOD”. The philosophical influence of Hinduism and Buddhism has created awareness of how our actions good and bad influence our future. There is an English quote “what you reap is what you sow” that is true like in the case of Karma. However, the philosophy of Karma is more complicated as it moves from one birth cycle to another till we achieve Moksha or Liberation from the cycle of life and death.

The word “Karma” is derived from the Sanskrit word “Karm” which means action, deeds.  The action of karma should be interpreted as movement of thoughts and movement of our body. Broadly speaking Karma means not only action, but intention and desires also.

The scientific community also has echoes of the Law of Karma. The Newtons law of Motion says that every action has an equal and opposite reaction. So we see the Law of Karma very much in our lives and in nature too.

Many times despite our best and sincere efforts we do not get success. Like failure in exams despite studying hard for the exams. It can also be losses in business or failure in relationships and marriage. We need to understand that current events like failure or success are not entirely determined by actions in this lifetime but also determined by actions and deeds we did in our previous birth.

The good thing about the Law of Karma is that it is universal and not limited to any individual, gender, caste, religion, and creed. For example, the environmental pollution and degradation is a direct result of the exploitation of natural resources. Today because of this we have more deaths and devastation due to natural disasters like hurricanes, landslides, floods etc than we ever had before.

According to Hindu scriptures, the law of Karka is so strong that even Gods are subject to it. Lord Krishna himself said to have died because of unintentional action of a hunter who mistook his toe to be a rabbit. As per the scriptures, this was a consequence of his own act of killing Bali from behind a tree in a deceptive manner in his previous incarnation as Lord Ram.

Like I said above the Law of Karma is complicated as it extends from previous birth to next birth. It also gives results in our present lifetime. When we are talking about karma we should know that there are three types of Karma and these are Sanchita Karma, Prarabdha Karma and Agami karma. 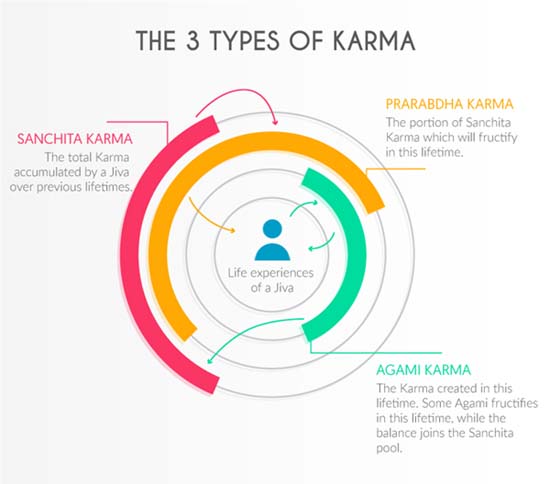 It is important to understand that the choices which we made earlier in our life or past life have landed us where we are today and the choice that we make today will dictate our tomorrow. Therefore it is highly important that we pay attention to our present actions and thoughts. The life we will have tomorrow will be a derivative of our present actions.