Scientific Matching of Horoscopes for Marriage

Once upon a time, Men were the predominant race and the fair sex were subordinate to them. Women had only the responsibility of giving birth to children and look after them till they became adults supervised by the male chauvinists. Till very recently they did their job very well and produced lot many children until after they reached their fifties. Men provided all their wants and were the breadwinners. And chastity was considered as the best virtue of a woman even endorsed by the epics and scriptures. In this process they had to compromise a lot for being subservient to their men folk and one day it was natural that they revolted. And to the men folk WIFE became “Worry Invited For Ever”.

So men started to choose their women and the main instrument in selection was a Horoscope Matching between the two. Astrology came to their rescue and it was ascertained that a woman will bring progress and happiness to men and the axioms in Astrology suited their purpose. Kuja Dosha and many other similar axioms were invented and it was all geared to the prosperity of men. I am giving an example of the definition of Kuja Dosha (Mars Affliction).

Which means that if Mars is posted in the 2nd, 4th, 7th, 8th or 12th houses without aspects or conjunctions of benefic planets, sure she will kill her husband. And such girls were desisted for marriage.

And what about the husbands. If they had Kuja Dosha in their horoscopes, women were sacrificed so that they could marry again. So it was always a one sided affair in favour of the men. Men made it certain that women did not get any education thus ensuring that they never had the power of thinking.

Then things changed and slowly the girls too started receiving education and they started to have their own say in matters regarding marriage. But the rules of horoscope matching did not undergo suitable changes and astrologers continued to follow the age old axioms in determining the compatibility of horoscopes for marriage.

And the result was disappointing. These days lot of marriages do fail for want of compatibility in many essential factors of life as represented by the different houses of a horoscope and daily it is on the increase. Let us now look at the reasons for the failure of marriages as per a senior marriage counselor and a clinical psychologist Dr.Val Farmer which I am fully convinced of as a practicing astrologer for more than five decades. Let us now associate those reasons with the respective houses in a horoscope.

Thus you can see that if two horoscopes match in respect of all the houses or at least in most of the houses, a successful marriage can be resulted with love and affection between the partners. 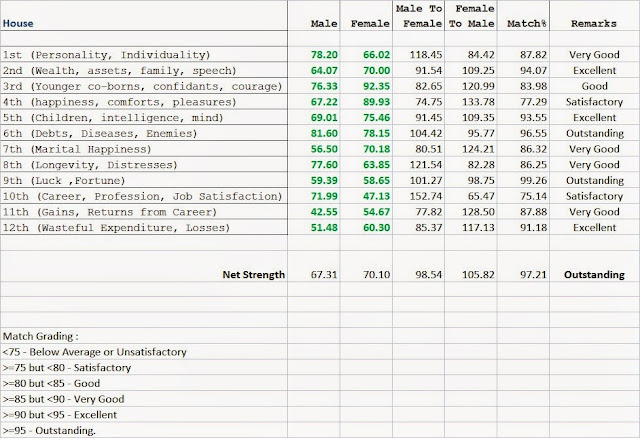 The Grading and scaling thereof  of the match percentage is my own based on my experience in Astrology. Here you can see in the example that there is a very good Male to Female compatibility and Female to Male compatibility thereby resulting in a net matching of 97.21% which is an Outstanding match and the marriage can safely be possible with all round happiness. Those who are interested can get this matching report using Paid Consultation.

You can download my Book ASTROLOGY RENOVATED in PDF from the link below.

I am a retired Software architect with more than 56 years of experience in Software development, EDP Management and MIS starting from 1964 and belong to the first batch of computer professionals in India. Astrological research is my hobby. I am 76+ years young. I have devised a scientific and mathematical method of evaluating a horoscope similar to a Mark Sheet you receive from Board of Schools or Universities after you complete a degree or diploma course of study, using which you will know where you stand among your peers. I do not believe in remedies to propitiate the planets or Gods by shortcut means like wearing a Gemstone, or doing Poojas and Homa using a middleman like a priest or pundit or anyone who has made it a profession. Nor do I believe in penance or sacrifices done by hurting yourself or someone else. I believe that Prayers to God by the self is the only means of getting His blessings which can ease our problems of mind and body and help us in happy living. Brokers are never entertained by God in this regard. You can contact me on Whatsapp +91 9847823847 to get my book on "Astrology - A new Version" which contains details of Scientific Evaluation of a Horoscope and related articles. Use https://secureservercdn.net/160.153.137.14/dnl.b94.myftpupload.com/wp-content/uploads/pdf/AstrologyNewVersion.pdf to download the book. You can also contact me for Paid services in astrology using the link http://astrologymag.com/store/?catid=4
@ramachandran

Bhakoot Dosha in Kundli Matching In Horoscope Matching the Horoscope chart of the groom and ...